For some runners, going to altitude means one thing: training, and nothing but training. For me, however, my trip to altitude was a little different. I spent 9 days in the highlands of Guatemala and the only running I did was playing a ball game with local Guatemala kids that was some combination of monkey-in-the-middle and the three man weave. I packed my running clothes, fully intending to take advantage of the thin dry air, warm temps, blue skies, and hills (oh how I would have loved/hated to do some hill repeats). But after a few days, I knew there would be no repeats. This trip was about so much more than running…

My boyfriend and I left our New York City apartment at the ungodly hour of 4:15am and drove through the East Village en route to the airport. We felt old, as our neighborhood was still very much alive from the night before (apparently the wee morning hours are a great time to get pizza). A few hours and several naps later, we de-planed, bleary eyed and excited. We were in Guatemala City.

We went as part of an organization called the Music is Love Exchange (MILE). MILE is a group of artists, musicians, and music lovers, that work together to benefit the lives of underserved children, both in the US and abroad.

Every year, they organize a trip (“The Extra MILE”) which serves as an introduction to service for a group of lucky people from all over the US. We head down to Lake Atitlan, Guatemala to perform concerts for the locals, to carry out service projects, and to learn about Mayan and Guatemalan cultures and customs. But, as we would soon find out, the trip was not just about singing a few Christmas carols and carrying out a bit of manual labor.

As a textbook introvert, I was anxious (ok, very anxious) about spending so much “people” time with 29 others that I didn’t know that well, or at all. Thankfully, after a few jokes, heartfelt stories, and big hugs, my fears were gone. These guys were pretty rad. We eased into Guatemala time by spending a day hanging out on Lake Atitlan, and eating all the nachos and black bean puree our bellies could handle (two words: fresh guacamole!), but it was soon time to get to work.

After singing Christmas carols to the students, our first service experience was to improve the courtyard in a secondary school in Cerro de Oro.We painted the school, hauled rocks and dirt, and planted bushes. We turned a weed-filled courtyard into a green space, and we had FUN doing it.

During work breaks, we ate lunches and snacks provided by local women, bought scarves from nearby weavers, and played soccer with the kids. We took selfies, gave piggy back rides, and played ball games. It didn’t matter that I was operating on high school level Spanish, we were able to converse enough to trade some light-hearted and silly trash talk (turns out I’m just as bad trash talking in Spanish as I am in English).

The next day, a brave group went coffee picking high up on the mountain-side while the rest of us traveled to Hospitalito Atitlan where we learned all about the role of western medicine in an indigenous Mayan area (truly fascinating). After more Christmas carols, we got to work cleaning solar panels, clearing gardens, picking coffee, and cleaning and organizing the pharmacy.

We finished each day exhausted and dirty, but energized and spiritually alive. Dinners felt like big family gatherings and late night-music hangs had the familiarity of spontaneous performances in a dorm room down the hall. There were jokes, shared smiles, star gazes, and giggling fits. We had deep conversations and light-hearted exchanges, we shared our blankets and our wine, we sang along, we day-dreamed and we dozed. 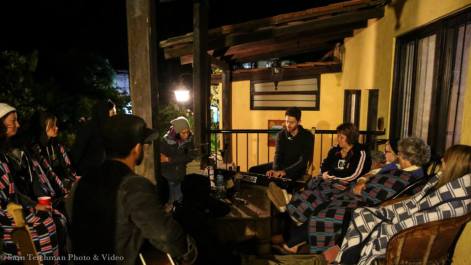 After 9 days in Guatemala, it was time to come home. Goodbyes felt like we were leaving summer camp, promising to keep in touch and return the next year. I’m terrible at goodbyes, I get incredibly awkward and forget how to speak like a normal person — I couldn’t say goodbye thinking we’d never see each other again — in just 9 short days, these people that had once been strangers became not just friends, but also individuals with whom I shared a great secret: the spiritual experience that was Lake Atitlan. For days, my facebook feed was a flurry of activity — pictures, videos, and comments, all helping me feel like I was still at the Lake. After being home for almost a week, my mind was still swimming — I dreamt of the Lake, the students, the truck rides in the countryside, and the friendly faces that waved to us as we drove by (truth: I also fantasized about the avocadoes and the coffee). Once my mind settled, I thought of our service. I thought of how I could carry this feeling of giving back, of love exchange while home in New York City.

These days, I’m back in my routine, running, going to the gym, meeting friends, and spending time with family… but there’s a small part of me that’s still at the Lake, dirty after a day of hauling soil, eating nachos, watching the Hummingbirds, and looking forward to the evening’s concert.