… go out and watch a marathon.”

Last Sunday, I divided my time between 1st ave and 95th St and 5th ave and 95th street, miles 18 and 23 respectively, of the New York City Marathon. (I also *happened* to end up at a Wafels and Dinges truck, but that’s another story.) 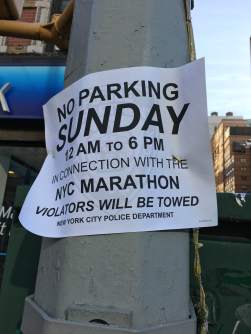 After getting off the subway at 63rd Street, I walked up First Ave and and saw Memorial Sloan-Kettering Cancer Center – a place where my brother was treated for cancer, and where I spent 8 years doing breast cancer research. As I walked past their Fred’s Team banners and balloons, the tears started flowing. I passed crowds of people from Germany, the Netherlands, France, and Italy. I watched as little kids cheered on parents. significant others cheered on partners, perfect strangers high-fived anyone who looked like they could use a boost. I watched in awe as Mary Keitany flew past us on her way to victory, then stood speechless as eventual 3rd place  American Olympian Molly Huddle and gold medal triathlete Gwen Jorgensen pushed though the wall. Then the professional men came, and my breath caught in my chest – their grace and power made it look so easy, but if you look close enough, you’ll see the tiniest grimace or errant arm swing, revealing the pain they’re trying so hard to hide. I waited (and cried. Again.) as Sam came up 1st Ave, and then when he met me on 5th Ave. New York was a party, and the positive energy was contagious. I was filled with pride, inspiration, and optimism. 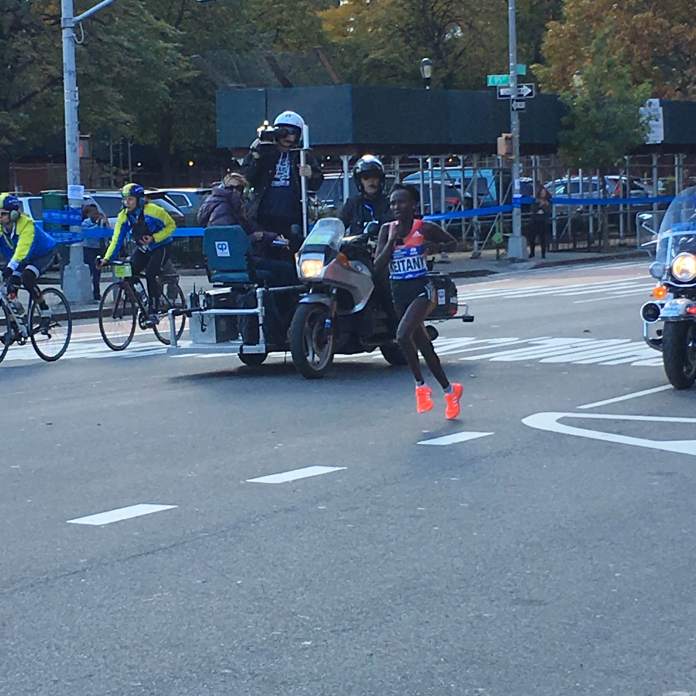 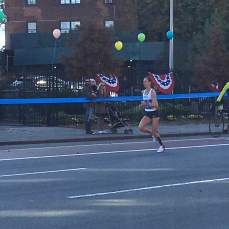 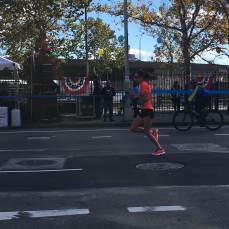 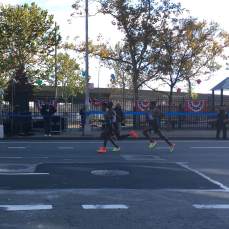 Top 3 men
Then came Tuesday. Sam and I got up early to vote, casting our ballots before 7am. I’ve never been one for politics, but this one, well, this one was different. Like so many other women, I’ve been the subject of inappropriate and unwelcome attention — whether it’s on a run, or simply walking down the street. I’ve been followed, yelled at, intimidated, verbally harassed. I’ve had to restrict my running routes and running schedule. I’ve crossed the street when something didn’t feel right and changed subway cars when the hairs on the back of my neck stood up. Sadly, I’ve gotten used to checking behind me on a dark street, or making sure no one slips in after me when I enter my building. Every once in awhile, I get angry and vent about how it’s not fair, about how men don’t understand that we have to think about this stuff, how much simpler things would be if I didn’t have to think about what time I’m getting on the subway, if I’m wearing the “wrong” outfit, or if I should run in a different neighborhood, or at a different time of day.
Anyway, to me, the foundation of this election wasn’t (totally) about politics. It was about basic human decency. It was about a candidate who thought the behavior I experienced as a woman was perfectly acceptable; after all, he doesn’t limit this hate and anger to one gender, ethnic group, or religion. For this (and many other reasons I’m not going to enumerate here), I’m not okay associating with someone like that, let alone have them represent our country. And so, on Tuesday morning when I filled in the circle next to Hillary’s name, I thought of all the times I was told to stop being emotional, that I was “good for a girl”, that people were surprised I could “keep up with the boys”. The times I was winked at by my boss, or mistakenly thought of as a secretary instead of a doctor.
As we all know, things didn’t turn out as predicted. While Secretary Clinton did win the popular vote, she lost in the Electoral College, which means that we’ll have to wait 4 years for another strong woman to come though. 4 more years for another Molly Huddle at mile 25, another Sue Bird in the 4th quarter, or Serena Williams in the 3rd set. As Katherine Switzer, the first woman to run the Boston Marathon, once said, “if you’re losing faith in human nature, go out and watch a marathon.”
Brb, I’m gonna go watch some marathons.

One thought on ““If you are losing faith in human nature…”